Oxford Gun Club has two skeet fields.  Shoots are held weekly on Wednesday afternoon and evening.  Each field has a standard layout utilizing Super Star traps and wireless trap releases.  In addition to skeet on Wednesdays there is also double wobble trap.  This game utilizes two Promatic wobble traps that oscillate left to right and up and down offering a wide variety of shots.  A fast moving game that can be as challenging as you want to make it offering singles, report doubles and true doubles.

Skeet and wobble trap shooting every Wednesday from 5:00 PM to 9PM, last sign up at 8:30PM 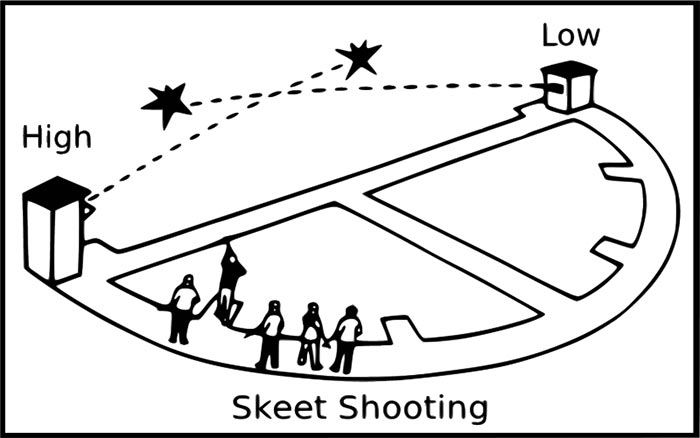 Skeet shooting is a recreational and competitive activity where participants, using shotguns, attempt to break clay targets mechanically flung into the air from two fixed stations at high speed from a variety of angles.

Skeet is one of the three major disciplines of competitive clay pigeon shooting. The others are trap shooting and sporting clays. There are several types of skeet, including one with Olympic status (often called Olympic skeet or international skeet) and many with only national recognition.

The international version of skeet uses a target that is slightly larger in diameter [(110±1) mm vs. 109.54 mm], thinner in cross section [(25.5±.5) mm vs. 28.58 mm], and has a thicker dome center, making it harder to break. International targets are also thrown a longer distance from similar heights (over 70 yards), resulting in a faster target speed.

The firearm of choice for this task is usually a high-quality, double-barreled over and under shotgun with 26- to 30-inch barrels and very open chokes. Often, shooters will choose an improved cylinder choke (one with a tighter pattern) or a skeet choke (one with a wider pattern), but this is a matter of preference. Some gun shops refer to this type of shotgun as a skeet gun. Skeet chokes are designed to be a 30-inch circle at 21 yards distance. Alternatively a sporting gun or a trap gun is sometimes used. These have longer barrels (up to 34 inches) and tighter choke. Many shooters of American skeet and other national versions use semi-automatic and pump-action shotguns.

The event is in part meant to simulate the action of bird hunting. The shooter shoots from seven positions on a semicircle with a radius of 21 yards (19 m), and an eighth position halfway between stations 1 and 7. There are two houses that hold devices known as “traps” that launch the targets, one at each corner of the semicircle. The traps launch the targets to a point 15 feet above ground and 18 feet outside of station 8. One trap launches targets from 10 feet above the ground (“high” house) and the other launches it from 3 feet above ground (“low” house).

The shooter must then re-shoot his first missed target or, if no targets are missed, must shoot his 25th shell at the low house station 8. This 25th shot was once referred to as the shooter’s option, as he was able to take it where he preferred. Now, to speed up rounds in competition, the shooter must shoot the low 8 twice for a perfect score.

Skeet shooting was invented by Charles Davis & William Harnden Foster of Andover, Massachusetts. Davis, an avid grouse hunter, and Foster, an avid Hunter, painter, illustrator and author of “New England Grouse Hunting”. In 1920 they created a game which was informally called “Shooting around the clock”.(3.) [1] The original course was a circle with a radius of 25 yards with its circumference marked off like the face of a clock and a trap set at the 12 o’clock position. The practice of shooting from all directions had to cease, however, when a chicken farm started next door. The game evolved to its current setup by 1923 when one of the shooters, William Harnden Foster, solved the problem by placing a second trap at the 6 o’clock position and cutting the course in half. Foster quickly noticed the appeal of this kind of competition shooting, and set out to make it a national sport. The game was introduced in the February 1926 issue of National Sportsman and Hunting and Fishing magazines, and a prize of 100 dollars was offered to anyone who could come up with a name for the new sport. The winning entry was “skeet” chosen by Gertrude Hurlbutt.[2] The word “skeet” was said to be derived from the Norwegian word for “shoot” (skyte). During World War II, skeet was used in the American military to teach gunners the principle of leading and timing on a flying target. The first National Skeet Championship was held in 1926.[1] Shortly thereafter, the National Skeet Shooting Association was formed.[1] For his role in perfecting and developing the sport, William “Bill” Foster was named as one of the first members to the National Skeet Shooters Association Hall of Fame in 1970, and is now known as “The Father of Skeet”. (4.)